← more from
PNKSLM Recordings
Get fresh music recommendations delivered to your inbox every Friday.

All These Worlds Are Yours [LP] 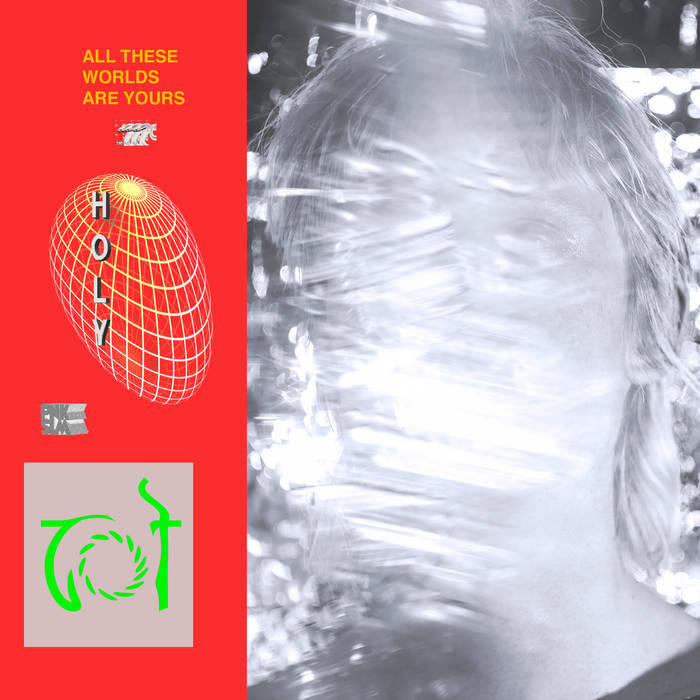 Hugh a very beautiful and groovy album. Too many great tracks to choose from Favorite track: all these worlds are yours.

Not even his co-producer knows how All These Worlds Are Yours - the second album from Stockholm-based Hannes Ferm, aka HOLY - has ended up sounding. Uprooting from his native Umeå to Stockholm at the beginning of 2016, Ferm headed straight into the notoriously DIY Studio Cobra with Les Big Byrd’s Martin Ehrencrona, with a head full of ideas and a new part-time job there. Yet for all of Ehrencrona’s work co-producing on studio hours, Ferm was sneaking in late at night; breaking his songs apart and meticulously building them back up again layer upon layer.

Starting out as a concept album, and recorded sporadically from January 2016, All These Worlds Are Yours quickly developed into a vivid, deeply personal exploration of our relationship with the night - imagining the wonders that it holds beyond the stars - while battling with inner demons back in reality. What do we discover about ourselves in the early hours as our minds are racing and we can’t sleep? How do our day-to-day experiences and emotions end up influencing our dreams? Is there really alien life out there, and if there is, would they understand the meaning when we say we’re feeling alien?

Musically, All These Worlds… bursts with the youthful joy of listening to David Bowie’s The Rise and Fall of Ziggy Stardust and the Spiders from Mars or Todd Rundgren’s A Wizard, a True Star for the first time. Underneath the layers of piano flourishes and psychedelic swirls, All These Worlds... is unmistakably and unashamedly inspired by the great glam-rock records. Taken as a whole, it’s a romanticised painting of the early ‘70s - full of Rocky Horror Picture Show swagger and Brian Eno-esque art pop. It’s freaky, it’s theatrical, it’s alien - but above all us, it’s decidedly human.

“I’d just moved to Stockholm when I began recording - so I was adjusting to that - and the garage pop thing I had happening on Stabs… I just didn’t feel comfortable with it anymore. I wanted to go beyond my outer limits,” says Ferm. “I had a vision around the album that had its roots in the proto-glam-rock era that started to shape in the early seventies. But the last thing I wanted to do was to create an album that felt “retro”. My intention was to play around with the recurring elements of that music, like the lyrical themes and the musical arrangements, but to use them in a way that felt new and relevant - and most of all so they felt like something that I could stand for; something that was genuine.”

All These Worlds… has the qualities of a rock opera, but it’s far more nuanced and grounded than the drama that envelops them typically. It takes traditional, timeless, classic songwriting and revitalises it with modern anxieties, millennial ennui and a distinct coming-of-age charm. Opening track "Night of Earth" deals with drug experimentation and encountering a future version of yourself - one that tells you to change your life drastically, while the glistening "ððð" continues the inner struggle with wanting to accept these changes yet struggling with the past.

Clocking in at just under an hour across ten tracks, it’s certainly a journey - but one that plays out over unofficial acts, with tracks like the lead single "premonition / ◯ / it shines through" having their own acts-within-acts. Brimming with the same ecstatic energy you’d find in the best of Electric Light Orchestra while embodying the weird, modern pop sensibilities of MGMT and Foxygen, "premonition / ◯ / it shines through" is the beating heart of All These Worlds…. Ferm describes it as a “triptych of loss; of losing someone close to you.” It’s hard to tell with all the shimmering beauty within it.

If "premonition / ◯ / it shines through" is the beating heart, then the title track - "all these worlds are yours" - is the gloriously alien conduit that embodies it. The most timeless song Ferm has written to date, it’s a stunning eight-plus minutes that sounds like the centrepiece a musical stage show - overflowing with hearty, warming guitars; colossal drum work; an irresistible and insatiable piano melody and sky-high strings.

Resolutely positive, stadium-sized and unrepentantly anthemic, it not only perfectly encapsulates the proto-glam aesthetic Ferm was after, but justifies his layering in the process. Lyrically, it’s a show in all itself - a heart-on-sleeve tale that Ferm describes as being about “moving to Stockholm and being surrounded destructivity, dishonesty, drugs and decay in a way that I felt I hadn’t been before.” It’s the boldest, most cinematic HOLY have sounded to date. With Ferm mostly recording the lot - with the exception of a couple of friends - it’s also the most technically impressive.

Borrowing its name from the title of a book Ferm was given as a gift from his sister - All These Worlds Are Yours: The Scientific Search for Alien Life - it’s safe to say there’s a touch of the otherworldly lingering over it all. “I got into like - not science fiction in itself - but more researching about alien life,” Ferm explains. “Old reports of cases where people have seen UFOs - stuff like that. “I think that a lot of the songs are about this... character, almost… That thinks she's been abducted; brainwashed. And then comes back to earth. And I think every song has a trace of that in it - but it’s purely metaphorical. It’s a daydream, a form of escape.”

In the end, that’s exactly how All These Worlds… plays out. It’s an exquisitely composed form of escape; ten songs that embrace alien life, time travel and loving someone who’s not quite human as much as they do the inner workings of us as people.
“That's what makes it kind of special to me,” Ferm says of the album as a whole. “It’s all my ideas and dreams of space, coming face-to-face with my reality at the time.” In a sentence, All These Worlds… is as classically clean-cut as it is invigoratingly bombastic. It’s in a world all of its own.

Bandcamp Daily  your guide to the world of Bandcamp

Kari Faux drops off her deluxe album 'Lowkey Superstar' plus tunes by Shunaji and Samplelov.